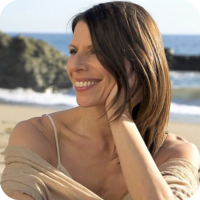 Tamara is an author, producer, speaker, and Head of Mindfulness at Calm.com

Tamara is Head of Mindfulness at Calm.com, and an author at Wisdom Publications. She has an official website at tamaralevitt.com. Tamara is founder of Begin Within Productions, which produces mindfulness based multi-media content.

Tamara’s dream, from a very early age, of becoming a country singer never unfolded as imagined, when real-life set in. But some of the challenges along the way were opportunities for finding inner strength and meeting other creatives who would help mould her future. Meditation became a 30-year passion that has grounded Tamara through difficult times and has become the dream job that she enjoys today.

This website is created and maintained by the Inspirational People non-profit organisation.

Image attribution: The above image has been cropped from image by ExperienceLifeMag, CC BY 3.0 via Wikimedia Commons

The Person You Become

Tamara reflects on how far she has come on her journey to the person she has become, and how she has learned the art of letting go, through her meditation practice, prioritizing balance and health, and returning to some of the things that give her the most joy.

A circa 1995 pic of Tamara in her Rock Star days, sporting flaming red hair.